Haunted by an Abandoned Department Store

It’s been one week since I fell flat on my face in front of the Gus Blass Department Store. Physically I recovered okay, I think. My left knee still hurts if I kneel on it, but the gash on my left hand no longer hurts and seems to be healing nicely. My glasses are still broken.

It was such a strange fall. It happened so fast. It was over in what appeared to be a microsecond. Most events like that usually happen in slow motion, so I was somewhat confused that this one didn’t. One minute I’m walking along the 300 block of Main Street, looking up at the seven story Blass Building, trying to figure out which part of the facade is actually terra cotta. and in the blink of an eye – BAMMMM! – flat on my face.

Right before I fell, in addition to trying to discern the terra cotta, I was humming the song Sukiyaki by Kyu Sakamoto. Birthday Party by The Pixies Three had been stuck in my head for about a week, driving me absolutely bonkers, so I was trying to get rid of it by replacing it with something else. Sukiyaki must be in the neuron right next to the Pixies Three Birthday Party neuron stored in my ibrain’s playlist because that’s the song that popped up next.

The thing that’s odd about humming that Sukiyaki song right before the fall is that the original title of Sukiyaki  is Ue o Muite Arukō, which translates into English as I shall walk looking up. Strangely enough, that is exactly what I was doing at the time; walking and looking up (cue Twilight Zone theme song). I don’t think there are any lyrics in the song about falling and busting your ass, but hey, let’s just add a little extra drama to the tune.

Now, according to Alice on The Brady Bunch, via Aunt Jenny (played by Imogene Coca), sukiyaki means ‘roasted rake’. I’m not exactly sure what the literal translation is, but I’m pretty sure it has nothing to do with walking or looking up or whatever else they are doing in the song. So why, when the song became popular in the U.S. in the early 60s, was it retitled Sukiyaki? I guess they figured that sukiyaki was the only Japanese word that Americans knew or could relate to back then. By today’s ostensibly politically correct standards that would be considered racist. It’s kind of like some big Japanese music mogul releasing Moon River in Japan and retitling it ‘Beef Stew’. It makes no sense. 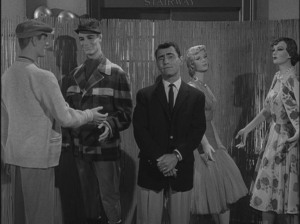 Ever since I took that bizarre fall (which I just can’t seem to quit talking about), I’ve been having some horrible nightmares about it. Nightmares involving the Blass Building, mannequins, zombies and an airplane. The mannequins in the nightmares aren’t your regular mannequins. They’re those creepy department store mannequins from the 50s and 60s. You know the type. Missing fingers, chipped faces and those aberrant, slightly too far apart, slightly off-centered, Tom Selleckesque eyes. Parts of the dream/nightmare are reminiscent of that ‘After Hours’ episode of The Twilight Zone. Anne Francis locked in a department store as the mannequins come to life. However, my department store dummies aren’t quite as nice as Annes turned out to be. Mine are trying to kill me.

Also in the dream, as I stated, there are zombies. I think the zombies make an appearance because the Blass Building is about a block away from the Citizen’s Area Transit (CAT) bus terminal. If you’ve ever been there then you know how much it resembles a scene from a zombie movie.

As far as the airplane…well, the only reason that I can think of it showing up in my dream is that Kyu Sakimoto, the guy who sang Sukiyaki, was killed in a plane crash. Now, it wasn’t just any plane crash. It was Japan Airlines Flight 123 that crashed on Osutaka Ridge in 1985. It is currently the deadliest single-aircraft accident in history. All 15 crew members and 505 out of the 509 passengers died.

Just about every building in the 300 block of Main Street is listed in the NRHP (National Register of Historic Places). And, if you want my personal opinion, they’re all haunted. The Blass Building, the Taylor Building, The Fulk Building… all of them. Haunted. Ghosts roaming the floors in every single one of them.

The Fulk Building, which is on the opposite end of the block from the Blass Building is probably the creepiest. It’s architectural style is gothic. It’s not totally abandoned though. There is a Military Surplus Store on the bottom floor. Sometimes they put this scary looking cartoonish mannequin out front to try to draw people in. Ummmm, no… Plus, there are those freaky mannequins in the storefront display window. 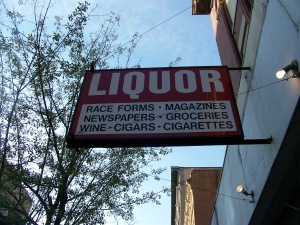 The Taylor Building, which is right next to the Fulk Building was built in the Late Victorian and Romanesque style of architecture in 1900. It is currently home to a liquor store.

I’ve never actually been in there, but I plan on going in one day and buying a bottle of booze. Maybe some tequila. Or a bottle of cheap wine.

So, in closing let me just say that, if you’re ever in Little Rock, make sure you visit the 300 block of Main Street. Walk around the block a couple of times. Walk through the alley behind the buildings (it’s scary). Look through the dusty windows of the first floor on the Blass Building and see if there are any mannequins walking around. Go to Bennett’s Military Supply and see if that cartoonish Military mannequin (which I’ve named Gus) is out that day. See if you can find the spot on the corner where I fell down. Some of the blood may still be there. Just check it out and see if you get a sense of the block being haunted. And make sure you hum Sukiyaki while you’re doing it.